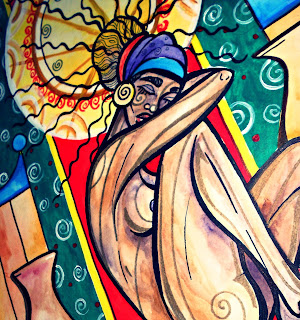 When I was twelve, or maybe thirteen, someone stumbled upon my book of drawings. It was a close relative, someone older, and whose opinion of me mattered dreadfully. She didn't seem to approve of all my drawings of girls. There were too many of them, and it struck her as a bit worrisome. She advised me to stop drawing so many of them, particularly not the half-clothed ones. I felt ashamed of my book of drawings, threw it away. For a few years I stopped drawing altogether, or sometimes, when I could bear it no more, would sketch hurriedly on scrap paper and throw it away right after I was finished. It makes me so sad now, but it's necessary to write this. Even as a girl, it was unacceptable and improper for me to be so fond of drawing girls.

I find something powerful and necessary in drawing women, drawing upon my own experiences and understanding of what it is to be. I draw faces and bodies carefully, with what I can only describe as tenderness. There is a love in the act of drawing, and it is a love that has slowly but perceptibly translated unto how I think and feel about myself. It is a reversal and a re-working of that fear into something bolder, older, and far lovelier.


Posted by Danielle Boodoo-Fortuné at 2:34 PM

Promote Your Page Too

Promote Your Page Too